There's one critical aspect of the Curtis Flowers case that we haven't looked at yet — the makeup of the juries. Each of the four times Flowers was convicted, the jury was all white or nearly all white. So we decided to look more closely at why so few black jurors had been selected. And it wasn't always happenstance.

THE BIG QUESTION
How did Curtis Flowers end up with a nearly all-white jury?

The outcome of a trial can often hinge on who's sitting on the jury. In Curtis Flowers' six trials, a simple pattern has emerged. When the jury was all white, or nearly all white, Flowers was convicted. In the two trials that had more than one African-American juror, the result was a hung jury. His fourth and most recent conviction, in 2010, was handed down by 11 white jurors and only 1 black juror.

That panel wasn't representative of Montgomery County's population, which is about 45 percent black. So how did it end up that way? How did Curtis Flowers get all-white or nearly all-white juries four times?

Jury selection happens in three parts. First, a large number of jurors are called in, and the judge excuses those that aren't both legally qualified and able to serve. The remaining group of prospective jurors is called the jury pool or "venire." Next, the judge, prosecutor and defense attorney question the jurors, in a process called voir dire, and eliminate jurors who say they cannot be fair and impartial. Finally, the prosecution and defense take turns striking jurors they don't want. The first 12 people that make it through without getting struck are seated on the jury. The attorneys also choose a few extra jurors, called alternates, who hear the case but don't deliberate unless one of the original 12 has to be excused.

Using the transcript of Curtis Flowers' sixth trial, in 2010, let's look at how the prosecution and defense used the rules of jury selection to shape the composition of the final jury. Due to the high-profile nature of Flowers' case, the court called in 600 potential jurors. After the judge determined who was legally allowed to serve, 156 remained in the venire pool. The process then unfolded like a game — the lawyers went back and forth, eliminating jurors. 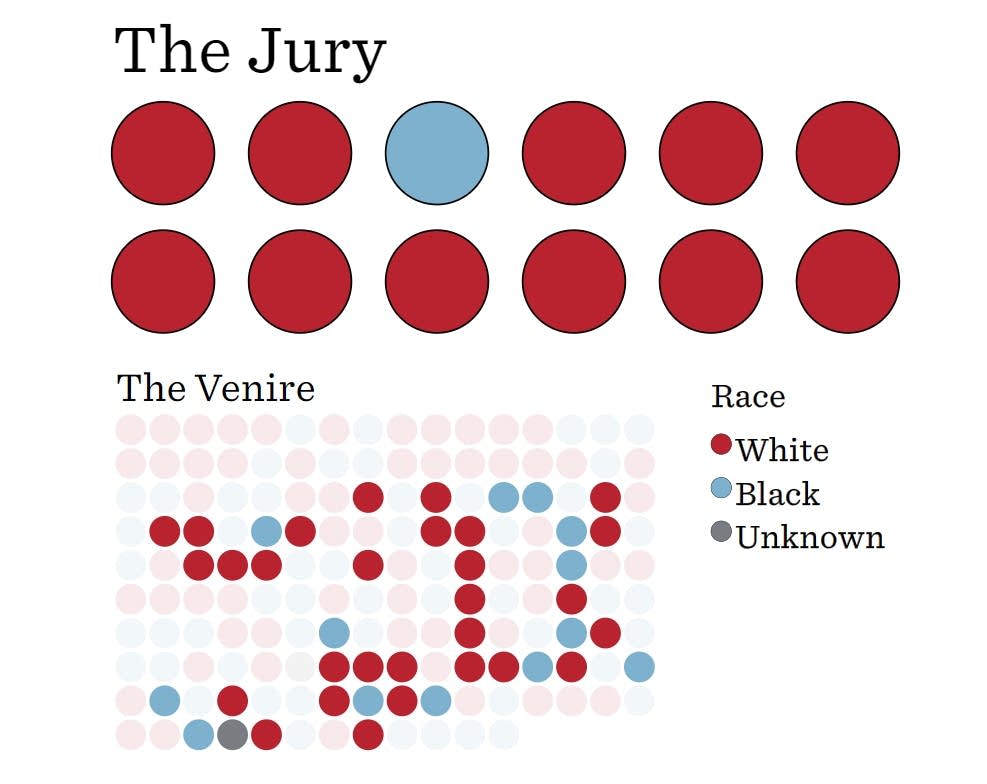 Explore how that pool of 156 was whittled down to 12 — 11 white jurors and 1 black — who would send Curtis Flowers to death row.

Join our closed Facebook group and connect with other listeners and the journalists behind In the Dark. Donate $50 for access to the group. Your donation directly powers investigative reporting.
A QUIZZICAL LOOK
Why a nearly all-white jury might be legal

The age of the all-white jury should have ended in the mid-1980s. And the man who was supposed to have ended it was named James Batson.

Batson was arrested and charged with burglary in Louisville, Kentucky. During jury selection, the prosecution struck all the potential black jurors. Batson, an African-American, objected, claiming the prosecution was violating his constitutional right to be tried by his peers and asked the judge to dismiss the whole jury.

The judge refused, and Batson was convicted by the all-white jury. Batson appealed all the way to the U.S. Supreme Court, which in 1986 issued a seminal ruling: It is unconstitutional for a lawyer to strike a juror because of race.

The Batson v. Kentucky decision not only banned the use of race to exclude people from juries but also created a process through which lawyers can contest a strike made by opposing counsel. First, the objecting lawyers must tell the judge that they believe the other side struck a juror because of race. Either the prosecution or the defense can file a Batson challenge, but it's commonly a defense tactic.

But Batson is flawed in one critical way: The prosecution's stated reasons for striking a black juror may be just a veil for discrimination. Proving that is incredibly difficult, which is why lawyers rarely win Batson challenges.

And because Batson challenges often fail, defendants can still face all white or mostly white juries. That's what happened to Curtis Flowers.

Flowers' lawyers raised a number of Batson challenges during his six trials; the overwhelming majority of them were rejected. In fact, only 11 of the 72 jurors — 15 percent — in Flowers' trials were black.

In 2007, the Mississippi Supreme Court overturned Flowers' third conviction, writing that Doug Evans' juror strikes presented "as strong a ... case of racial discrimination as we have ever seen in the context of a Batson challenge."

When is a strike legal? Take our quiz below and try to spot an unconstitutional strike, using potential jurors from trials in the Fifth Circuit Court District, where Doug Evans is district attorney, and the reasons given for striking them.
WHEN THE JURY WASN'T NEARLY ALL WHITE
The holdout 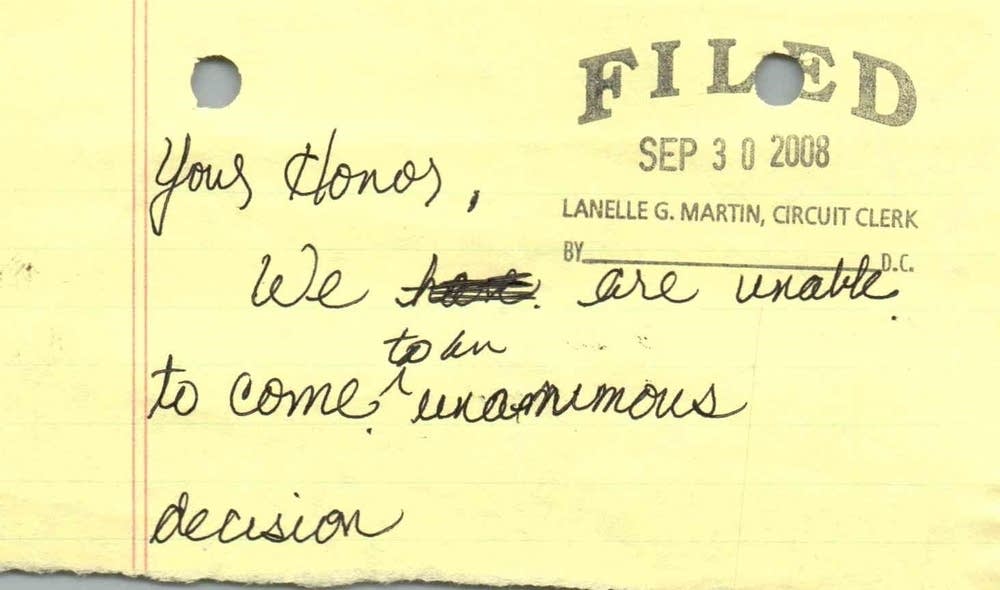 This is the note the jury sent to Judge Joseph Loper at the end of Flowers' fifth trial, which ended in a hung jury. Read other notes from the jury.

When the jury in Curtis Flowers' fifth trial deadlocked, it was because of a single holdout, a black juror named James Bibbs, who didn't think there was enough evidence to convict. After a fraught jury deliberation, Judge Joseph Loper called the trial quits.

As the other jurors filtered out of the courtroom, Loper accused Bibbs of having lied during jury selection by failing to disclose a fact he later brought up during deliberations — that he'd been at a lawn mower repair shop near Tardy Furniture on the day of the murders.

TV news cameras caught — on tape — the heated exchange that followed. "In my eyes, you have committed perjury," Loper said, accusing Bibbs of trying to subvert justice.

Flowers' attorney, Ray Charles Carter, also drew the ire of Loper when he made a move to leave in protest. "You have a seat, Mr. Carter," Loper shouted. "You have not been released. I don't know who you think you are." The judge threatened to hold Carter in contempt of court if he didn't apologize.

The afternoon ended with Loper's order that Bibbs be arrested.

Six days later, Bibbs was indicted on two counts of perjury. He hired attorney Robert McDuff (full disclosure: McDuff represented APM Reports in our effort to obtain public records in Mississippi). McDuff argued that the court should take special precautions to ensure that a holdout juror was not put on trial for the wrong reasons.

"There is a significant danger when a prosecutor's office does what has been done here. ... This can chill jurors in the future from voting their honest convictions. This raises the specter that a juror is being punished for concluding there was reasonable doubt and for voting to acquit," McDuff wrote in a motion to dismiss the indictment.

The case dragged on for eight months before District Attorney Doug Evans agreed to recuse himself, at the behest of Bibbs' lawyer, who argued that it was a conflict of interest for Evans to prosecute the former juror. The state attorney general's office took over and asked the court to dismiss the case.

IN THEIR OWN WORDS
On being charged with perjury:
"It was such a shock and a surprise. I don't know what to think at this time, you know. I knew that, you know, I hadn't done anything wrong, so I didn't really worry too much 'cause I know what it was wasn't true."
-JAMES BIBBS, THE ONE HOLDOUT JUROR IN FLOWERS' FIFTH TRIAL
ANNALS OF THE ALL-WHITE JURY
Acquitting Emmett Till's killers 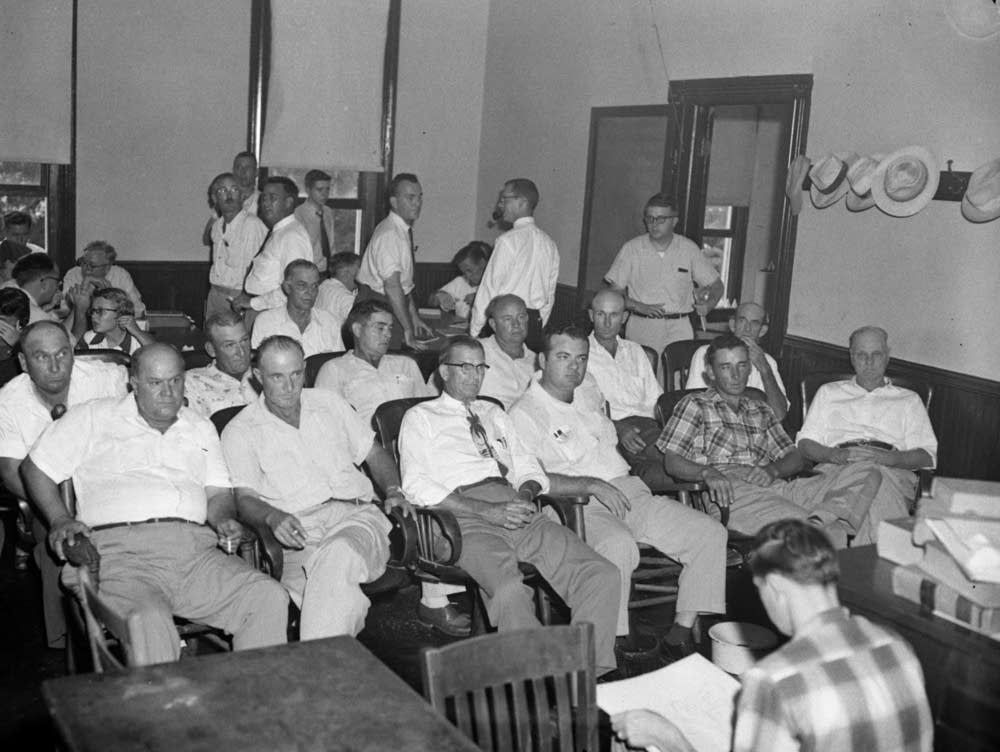 In the early morning hours of August 28, 1955, Roy Bryant, his half-brother, J.W. Milam, and perhaps several other people, barged into the Leflore County home of a black sharecropper named Moses Wright. In front of Wright's family, Milam and Bryant kidnapped his 14-year-old grand-nephew. The boy's fate would make him a lasting symbol of the horrors perpetrated against African-Americans not just in the Mississippi Delta but in the entire Jim Crow South. His name was Emmett Till.

Till was visiting from Chicago. A week earlier, he'd arrived by train at the station in nearby Winona, just across the street from Tardy Furniture.

His troubles began when he and his cousins went to Bryant's Grocery & Meat Market, a white-owned store that served mostly blacks, in Money, Mississippi. There, Till apparently did something to offend Roy Bryant's wife, Carolyn, who was tending the store. Carolyn Bryant later testified that Till touched her hand, grabbed her waist and let out a "wolf whistle" as he left the store. In a 2007 interview with historian Timothy Tyson, Bryant said that parts of this account were false. Till had never touched her waist, not that doing so would have justified what happened next.

Three days after his abduction, Till's naked body was found floating in the Tallahatchie River. His head was crushed — he'd been brutally beaten and shot — and he was tied to a 75-pound cotton gin fan with a piece of barbed wire that was wrapped around his neck. A ring on his finger had to be used to help identify him.

Rumors spread quickly that Milam and Bryant were responsible. Several witnesses had seen the men take the boy from his family's home that night. Both men were questioned by police. While they confessed to kidnapping Till, Milam and Bryant claimed they'd later released him after Carolyn said he wasn't the one who'd "done the talking" to her at the shop.

Milam and Bryant were arrested and indicted for murder.

There were other witnesses. A young neighbor of Milam's family said he saw Milam, Bryant and several other men take Till to a barn that night and heard them beating him. A black man in town saw Milam at a gas station the following morning. Milam had something bulky under a tarp in the bed of his truck and blood was dripping from the tailgate.

Meanwhile, Till's bereaved mother, Mamie Bradley, wanted her son's body brought home to Chicago. According to historian Timothy Tyson, Moses Wright negotiated the removal of Till's body from Mississippi by promising a local undertaker that he wouldn't, under any circumstances, open the coffin. But 625 miles north, Bradley had another idea. "Let the people see what they did to my boy," she reportedly said.

Till's open-casket funeral drew a crowd of 50,000 by some estimates. Civil rights leaders seized the opportunity to decry a racist and violent southern culture. Pictures of Till's battered, unrecognizable face were printed in JET magazine and publications across the country. News of his hideous lynching led to outrage around the world.

When Milam and Bryant were brought to court in September 1955, Mississippians groused that their entire way of life was being put on trial. Just a year after the Supreme Court had forced an end to school segregation in Brown v. Board of Education, Southerners were quick to bristle at what felt like more overreach from outsiders.

IN THEIR OWN WORDS
On Doug Evans' jury selection:
"But I mean there wasn't no doubt that he was trying to get rid of all the black folks. That's exactly what he's trying to do."
-RAY CHARLES CARTER, DEFENSE ATTORNEY
Subscribe for story notifications
We'll send you an email when new episodes of In the Dark are published.
HOST AND LEAD REPORTER
Madeleine Baran
SENIOR PRODUCER
Samara Freemark
PRODUCER
Natalie Jablonski
ASSOCIATE PRODUCER
Rehman Tungekar
REPORTING
Parker Yesko
Will Craft
WEB EDITORS
Dave Mann
Andy Kruse
EDITOR
Catherine Winter
EDITOR-IN-CHIEF
Chris Worthington
MUSIC
Gary Meister
Johnny Vince Evans
AUDIO MIX
Corey Schreppel
Feedback and support
We're interested in hearing about the impact of APM Reports programs. Has one of our documentaries or investigations changed how you think about an issue? Has it led you to do something, like start a conversation or try to do something new in your community? Share your impact story.
Your financial support helps keep APM Reports going strong. Consider making a tax-deductible donation today.
Additional materials