On the morning of July 16, 1996, someone walked into a furniture store in downtown Winona, Mississippi, and murdered four employees. Each was shot in the head. It was perhaps the most shocking crime the small town had ever seen. Investigators charged a man named Curtis Flowers with the murders. What followed was a two-decade legal odyssey in which Flowers was tried six times for the same crime. He remains on death row, though some people believe he's innocent. For the second season of In the Dark, we spent a year digging into the Flowers case. We found a town divided by race and a murder conviction supported by questionable evidence. And it all began that summer morning in 1996 with a horrifying crime scene that left investigators puzzled.

THE CRIME
One morning in July '96

When Sam Jones arrived at Tardy Furniture that morning, nothing looked out of place.

Jones had worked at the store in Winona, Mississippi, for 50 years before he'd retired. Earlier that morning, the owner, Bertha Tardy, had called to ask if he would come in to train two new delivery guys. So Jones drove downtown and parked in front of Tardy's about 10 a.m.

From the outside, the store looked like it always did. It was the last in a row of shops along Winona's historic Front Street. Tom Tardy had opened the store during World War II, back when downtown still buzzed with shoppers. Bertha had been his longtime in-store decorator. In 1985, Tom Tardy sold the business to Bertha, and in 1994, they married. By then, downtown Winona had declined, and many shops along Front Street were vacant. But not Tardy Furniture. The showroom was still stocked, and looking through its big glass display windows, it was easy for passersby to imagine how a country home could be spiffed up with a new bedroom or dining set.

When Sam Jones opened the front door that morning, July 16, 1996, he expected to see Mrs. Tardy and the new employees. But he didn't see anyone. He walked 20 feet or so into the cluttered showroom, past a cluster of armchairs and floor lamps. Nothing seemed amiss. But then he heard a strange sound.

"This noise [was] like somebody trying to catch their breath," Jones later testified. "I walked on a little further, and I heard it again. I looked down, and I saw what it was."

It was 16-year-old Derrick "Bobo" Stewart, one of the new delivery guys, lying in a pool of blood.

Then Jones noticed Robert Golden, 42, slumped against a counter beside Bobo. And Carmen Rigby, 45, face-down in front of a plaid sofa. Her car keys were wrapped around her pinky finger. Jones could see that 59-year-old Bertha Tardy was lying near the back office, the soles of her shoes pointing toward him. "After I figured I wasn't dreaming, well, I ran to get help for Bobo," Jones would later testify.

The victims
THE BIG QUESTION
How can someone possibly be tried six times for the same crime?

The answer to this question involves one person: the local district attorney. He or she has broad discretion over whether to take a case to trial, or, in the Curtis Flowers case, to repeated retrials.

If a prosecutor takes a criminal case to trial and the defendant is found not guilty, then it's over. The Fifth Amendment to the U.S. Constitution forbids the government from re-prosecuting someone for a crime once they've been acquitted — this is commonly known as double jeopardy.

But what's happened in the Flowers case is different. Flowers has never been acquitted. In his first three trials, he was convicted. Those convictions were later thrown out by an appeals court, which ruled that the prosecution made critical mistakes. Each time, the guilty verdict was essentially erased from the books, and the case went back to the beginning. The next two juries — in trials four and five — never reached a verdict. They just deadlocked and the proceeding ended in a mistrial.

After each one of these first five trials, the prosecutor in the case, Doug Evans, had a choice to make. Would he drop the murder charges against Flowers and release him or try again to convict him? And each time, Evans, who's been in office for more than two decades, chose to try Flowers again. The sixth trial's guilty verdict has so far held up. 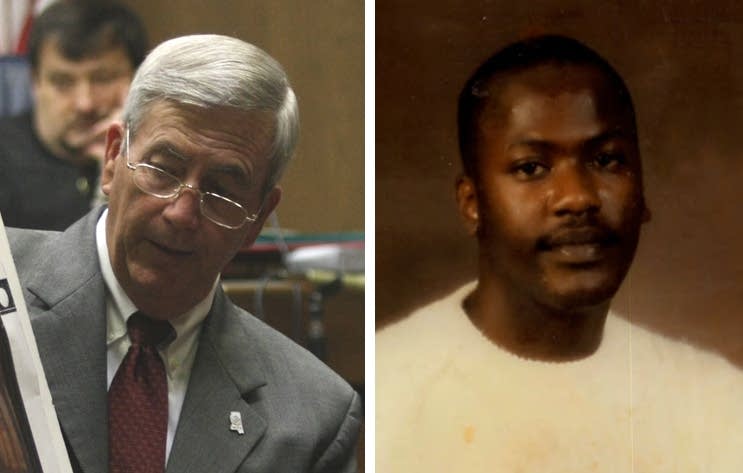 An excerpt from Flowers' testimony in his first trial — Oct. 16, 1997 — the only time he would ever take the stand and one of the only exchanges between the prosecutor and the accused.

Evans: You thought the only person you would have to kill to rob the store was Ms. Tardy, didn't you?
Flowers: No, sir.

Evans: And you didn't have any problem with killing her, did you?
Flowers: I didn't kill her.

Evans: You shot everybody in there in the head, didn't you?
Flowers: No, I didn't.

Evans: But you made some mistakes, didn't you?
Flowers: No, sir. I didn't do it.

Evans: You didn't wash all the gunshot residue off your hands?
Flowers: I didn't do it.

Evans: And you forgot and stepped in the blood?
Flowers: No, sir. I didn't.

Evans: That is just a few of the mistakes you made, isn't it?
Flowers: No, sir. I didn't do it.

Evans: Then when you went and gave your statement, you gave all kinds of inconsistencies you could be caught in, didn't you?
Flowers: No, sir. I didn't.

Evans: Starting with the fact that you weren't anywhere on the east side of Highway 51 that day?
Flowers: And I wasn't.
The trials of Curtis Flowers
Subscribe for story notifications
We'll send you an email when new episodes of In the Dark are published.
HOST AND LEAD REPORTER
Madeleine Baran
SENIOR PRODUCER
Samara Freemark
PRODUCER
Natalie Jablonski
ASSOCIATE PRODUCER
Rehman Tungekar
REPORTING
Parker Yesko
Will Craft
WEB EDITORS
Dave Mann
Andy Kruse
EDITOR
Catherine Winter
EDITOR-IN-CHIEF
Chris Worthington
MUSIC
Gary Meister
Johnny Vince Evans
AUDIO MIX
Corey Schreppel
Feedback and support
We're interested in hearing about the impact of APM Reports programs. Has one of our documentaries or investigations changed how you think about an issue? Has it led you to do something, like start a conversation or try to do something new in your community? Share your impact story.
Your financial support helps keep APM Reports going strong. Consider making a tax-deductible donation today.
Additional materials