Officer Garrett Rolfe was involved in a questionable and bizarre 2015 incident.

The Atlanta police officer who recently killed Rayshard Brooks was involved in another controversial police shooting in 2015 — a case that a local judge found so troubling, she's still bothered by it to this day.

The officer, Garrett Rolfe, was charged on Wednesday with felony murder and assault with a deadly weapon after a video showed him shooting Brooks in the back at a Wendy's in Atlanta on June 12. Brooks, who was black, had gotten into a scuffle with Rolfe and officer Devin Brosnan. He grabbed and fired one of the officers' Tasers and then was shot by Rolfe as he ran away. The Brooks shooting, coming less than three weeks after the police killing of George Floyd in Minneapolis, has galvanized calls for reform and defunding of police departments around the country.

In the days since the killing of Brooks, numerous media outlets have reported that 12 complaints had been filed against Rolfe during his tenure with the Atlanta Police Department, 9 of which were dismissed.

But the details of the 2015 shooting haven't been widely reported. Rolfe was one of three officers who fired their guns that night. One of the bullets struck the suspect, Jackie Harris, collapsing his lung, according to court records.

But the police report on the matter failed to mention the shootings. The judge in the case, Doris Downs, found that omission bizarre and outrageous.

"I recall it vividly," Downs, who's now retired, told APM Reports on Wednesday. "I had never really seen anything like this case, where the police report didn't even mention that any shots were fired."

The report — written by Jonathan Davis, the only officer on the scene who did not fire his weapon — says only that "Mr. Harris was transported to Grady Hospital due to injuries during the incident," but left out the fact that the injuries were caused by an officer's bullet.

"I feel that my rights have been violated and that I came very close to loosing [sic] my life," Harris wrote in a letter to Judge Downs five months later from Fulton County Jail. "I also feel that the Atlanta Police Department is trying to cover up their wrong doing."

Downs, who worked as a prosecutor in Atlanta before becoming a judge in 1996, shared that suspicion, and she says she personally reported those concerns to District Attorney Paul Howard.

"He sort of brushed me off, and said, 'Yeah that's the way it is. You know, it happens,'" Downs recalled.

Howard's office didn't respond to requests for comment. Howard held a press conference on Wednesday to announce charges against Rolfe and Brosnan.

Downs wasn't satisfied with Howard's explanation, and she says she reported her concerns to the Georgia Bureau of Investigation, the state's premiere law enforcement agency.

A spokesperson for the GBI said the agency couldn't find any information on the judge's report And Downs said she never heard back from the agency. The GBI now investigates all police shootings in Atlanta, but at the time the department usually investigated itself, a practice that advocates for police reform have long criticized.

Police spokesperson Marla Rooker told APM Reports that the department's investigation into the nearly five-year-old incident remains open. She declined further comment but said the department is working to review and redact documents related to the case requested by APM reports and other media organizations. 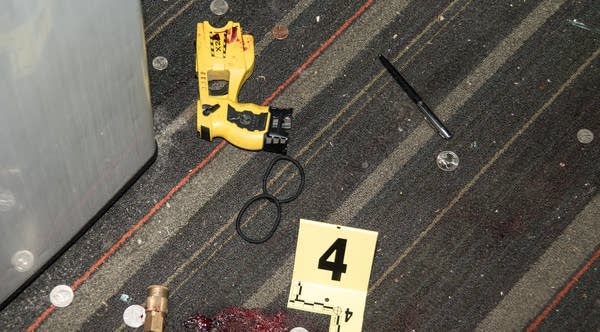 In 258 cases over three years, a Taser failed to subdue someone who was then shot and killed by police. Read the story.

The 2015 incident began when Officer Carl Harp ran the license plate of the Ford 150 that Harris was driving and discovered that the truck had been reported stolen. He tried to pull Harris over, and a chase ensued. It ended when Harris crashed first into a gas meter and then up onto the hood of a parked police car. No one was in the squad car at the time, according to department records released Wednesday.

It is unclear whether Harris, who is black, was shot before or after he crashed into the police cruiser. Atlanta Police Capt. Michael O'Connor told the Atlanta Journal-Constitution at the time that Harris "had a weapon — a 3,000-pound pickup truck."

A use-of-force report obtained by APM Reports indicates that the shooting was reported up the chain of command at the time even though it was not mentioned in the initial police report. The use-of-force document, signed by four supervisors a few days after the shooting, says only that "this incident is being investigated by the Homicide Unit. More than one officer fired during the incident, so it cannot be determined at this time whose rounds hit the suspect and whose rounds missed."

The department offered no explanation for why the shooting was not mentioned in the original police report or why the other documents were not turned over to Harris's public defender at the time. It produced two other reports on the incident. One, written by Officer Scott Demeester, says the three officers fired their weapons and that Harris "received an injury consistent with a gunshot wound to his upper torso." That report is not among the documents included in the court file on Harris's case.

Just over a year after he fired at Harris, Officer Rolfe violated the department's use of firearms policy in a separate incident, according to the department. He received a written reprimand for the violation more than a year later, in 2017, but the department has not released details on how he violated the policy, which covers the circumstances under which officers can point their weapons and when they are allowed to fire them.