Across the country, a gap persists between the number of black and Latino students graduating from state high schools and the number enrolling in state flagship schools.

Listen:
Flagship universities fail to represent state diversity
0:00 | 00:22:42
This audio story about the racial gap in enrollment at state flagship universities is based on a story produced by The Hechinger Report, a nonprofit, independent news organization focused on inequality and innovation in education. Sign up here for Hechinger's higher-education newsletter.

Stewart Lockett grew up in New Iberia, Louisiana, just south of Lafayette. During his senior year of high school he was figuring out where to go to college. He knew he wanted to stay in the state, and to study bio-engineering, but there were only three colleges in Louisiana that offered the major. One was Louisiana State University (LSU), the state's flagship university, in Baton Rouge. But he had reservations.

"We hadn't seen many of our predecessors who graduated before us attend LSU," says Lockett, who's African American. "So when you don't really see a lot of people before you do it, it's kind of like a cycle."

His high school guidance counselor hadn't even brought it up as an option and not many of his peers were considering it. Lockett says that out of a class of nearly 400 graduates from his high school, he remembers about seven went to LSU.

The high school he attended in New Iberia is about 50 percent African American. In Louisiana, about 44 percent of all high school graduates each year are African American. But at LSU, the state's flagship university, the proportion of black students is much lower according to enrollment data. In the last few years, black students have made up just about 12 percent of all students at LSU.

Casey Parks is an education reporter and she wrote about Lockett and this gap in black student enrollment at LSU for The Hechinger Report.

"For many years, LSU's recruiting team just didn't go to some parishes to recruit," Parks says. When she looked online to see where they were recruiting, she noticed the parishes that were missing all had something in common, "Almost all were predominantly black parishes."

Her Hechinger colleague Meredith Kolodner says this is not just an LSU problem and the gap is large among enrollment of Latino students in states as well. Each year for the past three years, Kolodner has been reporting on the gap in the majority of states between the number of black and Latino students graduating from high schools in each state, and the number choosing to enroll at their state flagship university.

Kolodner says it's important to track this because flagships are supposed to be the best, most accessible schools for all students in each state. "They're considered the best public universities in the state, they usually have more funding, they have more resources, they have alumni networks, their graduation rates are higher," she says.

Kolodner says the gap persists, in part, because of narrow standards used in admissions — like using a minimum ACT or SAT score and a minimum GPA to be considered. She also says that with major cuts to higher education in most states, schools are trying harder to attract out-of-state students who have to pay higher tuition.

"That helps to plug a budgetary hole for them," Kolodner says.

Jose Aviles joined LSU in 2017 as the vice president for enrollment. He had two decades of experience working in admissions, enrollment and retention.

"There's no question that the disparity [at LSU] was one of the greatest that I had seen of the places I have worked," Aviles says, "and I felt compelled to address it."

He quickly tripled the length of time the school spent recruiting high school seniors in the state each year from four weeks to 12 weeks, and made it a point to recruit in every single parish of Louisiana.

He also embraced "holistic" admissions, which he described as looking at the whole student, not just their scores. If a student scores below minimum ACT, SAT and GPA requirements, admissions officials look at whether or not a student's grades improved throughout high school, whether they took challenging courses and whether they showed initiative and a willingness to dedicate time to their studies.

The new approach is showing results. This fall, LSU has seen enrollment of both black and Latino freshman for fall 2019 more than double from 2017. 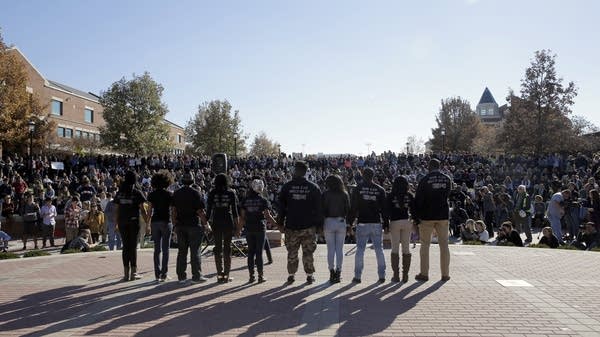 "It is, without question, the largest net gain of students in entering freshman classes that I've ever seen in any of my leadership positions anywhere else," Aviles says.

He says enrolling historically underrepresented students in the state is imperative not only so the school embodies its fundamental mission but so it survives. Colleges nationwide are struggling with lower overall enrollment.

"These incredibly talented students have the promise and potential to be successful and have earned the right to participate in their state, flagship institution," he says. "The status quo is no longer sustainable."

*Correction: An earlier version of this story mischaracterized LSU's holistic admissions review; the university still has minimum test score requirements but also looks at other factors for students who score below them.