A review of 31 cases shows more than half of officers involved had fewer than two hours of training past five years.

Nearly 2,000 people over two years were fatally shot by police officers in the U.S. during 2015 and 2016, according to databases created by the Washington Post and the Guardian newspapers. Of those, 142 victims were unarmed, according to the Post.

APM Reports reviewed the training records of officers involved in 31 shootings of unarmed people, focusing on incidents in 13 states where the records are open to the public and where de-escalation training was not required for all officers at the time of the incidents.

In more than half the cases, the officers involved had obtained fewer than two hours of de-escalation training since 2012.

Here are three incidents from the analysis, based on court records and other public documents. Each might have ended differently had the officers been adequately trained in de-escalation tactics, which include slowing down, creating space, and using communication skills to diffuse potentially dangerous situations.

'Trapped' in her car, officer fired

At just after 10 p.m. on June 9, 2015, he pulled his red Lincoln sedan alongside a police cruiser in Des Moines, Iowa, stopping close enough to block the officer's driver-side door.

Bolinger then hopped out of his car and jigged around in the street. In a dash-cam video, he flashes in and out of view, wearing a red T-shirt. It sounds as though he says, "My life is in danger," before getting back into his car and speeding away, squealing his tires. 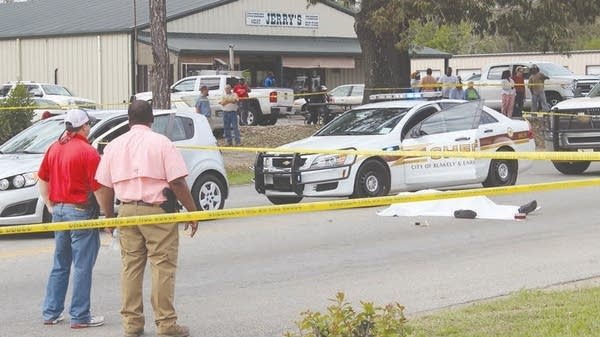 The officer, Ian Lawler, followed Bolinger in an unspectacular, 35-mile-per-hour pursuit. Officer Vanessa Miller joined the chase as Bolinger weaved along busy Merle Hay Road, on the city's west side. When Bolinger suddenly made a U-turn, the two officers boxed him in, Miller's car at the rear.

From her driver's seat, with the window rolled up, Miller fired her gun through the glass, killing Bolinger, who was unarmed, with one shot.

Miller said in a court deposition that she had been terrified of Bolinger. "In our training, one thing that we learn, and is kind of pounded into your head, is to not get trapped in your car, because you're at a very big disadvantage in your car," she said. "You're sitting in a seat that you can't get out of."

So, as Bolinger approached, Miller was thinking: "I know that I'm anticipating getting shot, and if I don't react as fast as I can, that I will die."

Since 2012, Miller had received instruction on how to shoot her weapon, how to administer CPR, how to respond to situations like hostage standoffs, and other skills, according to training records obtained by APM Reports. Miller trained a minimum of 16 hours per year.

What she didn't train for, however, is striking. There are no entries showing time spent on de-escalation or crisis intervention, the type of instruction that might have helped Miller manage a situation involving a person behaving erratically, whether due to mental illness, intoxication, or "excited delirium," as appears to have been the case with Bolinger.

The radio version of this story on Reveal: Radio stations | Podcast

Sgt. Ryan Doty, a spokesperson for the Des Moines Police Department, said the administration has integrated some aspects of de-escalation into regular training, but they don't teach it as a stand-alone skillset. "During use-of-force training, we talk about de-escalation as an option," he said. "We also teach tactical speech" to recruits and existing officers.

But it's difficult, he said, to force experienced officers to change. "You have officers who have been doing a job for 20 or 25 years a certain way, every day. And this is how they talk to people and this is how they handle things. And then to come in and say, 'You really need to rethink that and you need to do this. And you should do this.' Sometimes it's hard to really get them to buy into that."

Doty couldn't say whether de-escalation techniques might have made a difference in the Bolinger case. "I don't want to second-guess the actions of that officer," he said. Miller was cleared by a grand jury in the shooting.

"We find that sometimes with people who are acting irrationally, due to either drugs, alcohol, or mental illness, de-escalation techniques sometimes are ineffective," Doty said. "It's hard to reason."

On the night of Feb. 2, 2016, part-time officer Francis Schulze of the Carbondale, Penn., police department was standing in his yard talking to his landlord on the phone when he heard Joseph Molinaro and his girlfriend arguing loudly nearby.

Schulze walked out to his driveway and yelled "Yo" twice, by his own account. Failing to get a response, Schulze went into his house and grabbed his pistol, putting it into his waistband before approaching the couple.

After a brief, hostile interaction — during which Schulze said he asked, "What's the problem?" and Molinaro responded, "You don't want a ... problem" — Schulze said Molinaro walked toward him. This prompted Schulze to point his gun at Molinaro, who was unarmed, and scream, "Show me your ... hands!"

Molinaro took off running, with Schulze in pursuit down a dark street, where he shot him, fatally.

Schulze, who had received no de-escalation training as a city officer according to department records, is currently facing first and third degree murder charges.

Police Chief Brian Bognatz could not be reached for comment.

But Schulze's attorney, Corey Kolcharno, a former assistant district attorney, said his client was well-trained and had learned some de-escalation techniques a few years before the shooting, while in the police training academy.

"This was not Frank Schulze going to look for Joe Molinaro," he said. "This danger, this incident, this intoxicated person, this criminal came to Frank Schulze that night." He said Schulze handled the situation appropriately, responding to what he perceived to be a threat. "When he wouldn't listen to his commands, Molinaro escalated the situation."

Kolcharno called the charges against Schulze, "beyond disgraceful."

In Kenosha, Wis., on March 14, 2015, veteran officer Pablo Torres shot and killed Aaron Siler after trying to arrest him on a felony warrant.

Siler fled in his car and Torres followed in a high-speed chase until Siler crashed and began running. Torres chased him, jumping fences, until finally cornering Siler in an auto body shop behind a car.

Torres pulled out his gun and yelled for Siler to "get down on the ground," by his own account. He said Siler stood up, screamed an obscenity and said, "Shoot me." Torres said he thought Siler had picked up a metal pipe, but it turned out he was holding only a 5-gallon bucket.

The incident took place on Torres's first day back on patrol after having shot and wounded another man 10 days earlier, a suicidal Vietnam veteran who was holding two knives. Torres was cleared in both shootings.

Torres received no de-escalation training between 2012 and 2016, according to department records, though he had taken a seven-hour course on "surviving hidden weapons."

Will Craft and Curtis Gilbert contributed to this report.