Using a solution as obvious as it is rare, a few states have begun designing remediation course work while students are still in high school.

by Jon Marcus, The Hechinger Report

Stephanie Lewis and one of her students both cried when he graduated in the spring from South Pittsburg High School in Tennessee, where she teaches English. He'd accomplished something she wasn't sure he could: finish high school fully prepared to go right to college.

That's a feat a surprising number of high school graduates fail to achieve. Nearly three out of five students who show up at community colleges aren't ready to take college-level courses in math or English, and immediately end up in at least one remedial class, according to data collected from 30 states by Complete College America, an organization that is trying to increase the percentage of people who get degrees. At four-year public colleges and universities, it's 30 percent. In Tennessee, only 17 percent of public high school students score at college-ready levels in English, math, reading, and science on standardized tests. 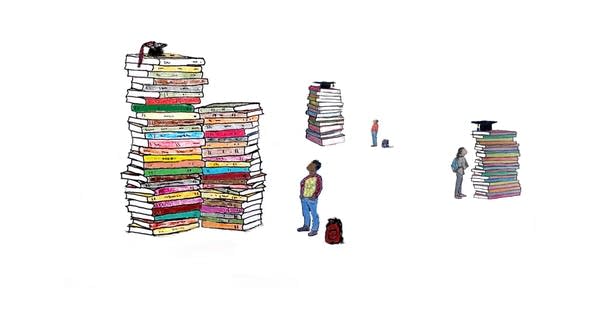 A system meant to give college students a better shot at succeeding is actually getting in the way of many, costing them time and money and taking a particular toll on students of color. Read more.

It's a little-noticed problem that forces these students to relearn material they should have already known, discouraging many from ultimately getting their degrees and costing the nation, by various estimates, between $1.5 billion and $7 billion a year.

But the idea of solving it in high school is as rare as it is seemingly obvious.

"This is how it should be done," said Alexandra Logue, former executive vice chancellor and university provost for the City University of New York (CUNY) system. "It is, however, more complicated than it sounds. You have to have everyone agreeing on what the standards are. And there are timing issues. When do you find out the student needs this, and how does that connect with when you provide the support?"

High schools in many parts of the country are judged on the proportion of their students who graduate, not whether those students are ready for college. Surprisingly, scoring "proficient" on state-mandated standardized tests required to receive high school diplomas does not necessarily mean students are prepared for college-level work.

"A lot of us can't really afford to pay those costs in college, so the fact that they were taken care of in high school helped a lot." Paola De La Torre Macias

Public colleges and universities, meanwhile, have historically been funded based on how many students they enroll, not how many actually receive degrees. And there's little communication between high school teachers and university faculty about what students bound for college ought to know. Even though the Common Core initiative to set consistent standards in schools nationwide has been promoted as a path to better preparing students for college and careers, for example, many higher education faculty say no one ever asked them what that means.

"The teachers in K-12 don't even always talk to each other," never mind to the faculties of colleges and universities their students go on to attend, said Lewis. "It shouldn't be that difficult, but we all have our areas on which we're graded, and a lot of teachers aren't going to jeopardize that and take a chance on trying something different."

Now some high schools like hers are trying something different, in a handful of states including Indiana, Tennessee and Colorado: They're identifying students in their junior years or earlier who aren't yet ready for college math or English and are trying to bring them up to speed before they leave.

In each of those states, the percentage of students who show up at college needing so-called remedial courses has declined, in some cases dramatically. An analysis of data obtained by The Hechinger Report finds that, from 2011 to 2014, the proportion of high school graduates arriving at Tennessee community colleges in need of remedial instruction fell from 69 percent to 59 percent. The percentage of students in Indiana landing at all public universities and colleges unprepared for college-level work dropped from 31 to 18, and in Colorado from 41 to 34. That's the time span during which these states began to focus on the problem in high schools.

The idea is getting a push from new funding policies that reward public colleges and universities based not on their enrollment, but on their students' ultimate success. That's because students who need remedial courses are significantly more likely to drop out of college. Those who do finish take longer and spend more on tuition than if they'd arrived ready for college-level work.

"Everything comes down to two things: politics and money," said Danny Wilson, South Pittsburg's principal. "The fact that the funding for postsecondary education in the state of Tennessee changed to where they've got some accountability for graduating people on time, obviously that changed the way the colleges were looking at it."

Wilson's high school accomplished something almost unheard of this spring: Every single one of the students who graduated — 64 percent of them considered economically disadvantaged and 15 percent racial minorities — were ready for college courses in reading, writing and math, according to the test used to measure that.

In Tennessee, that test is the ACT, and students take it in their junior years. At South Pittsburg and about 240 other high schools that are part of what's called the Seamless Alignment and Integrated Learning Support, or SAILS, program, those whose test results fall below the college-readiness cutoff score of 19 in math take remedial courses when they're seniors.

SAILS courses are designed by college faculty in collaboration with high school teachers and are provided in person and online. In the academic year just ended, five high schools including South Pittsburg added English and reading, for which the cutoff score is also 19; the English component will be expanded to 25 schools this year.

The additional work is layered on top of math and English courses seniors have to take anyway, meaning they have to spend some but not a prohibitive amount of time beyond the normal workload. Lewis and her fellow teachers motivate their students by appealing to their competitive natures, she said. Statewide, SAILS officials said, 92 percent of the students in the SAILS math program and 97 percent in English successfully complete it.

"I told them, 'You are one of five schools in the state that's doing this,'" Lewis said. "That got the competition going in our kids."

"I absolutely think everyone should be doing this. We know it's making a difference." Casey Sacks, project manager at the Colorado Community College System

So did knowing that they could succeed at college-level work, said Wilson, South Pittsburg's principal. "It changes kids' outlooks," he said.

The fact that they'd eventually spend less for college by getting remedial courses out of the way in high school also wasn't lost on them, said Paola De La Torre Macias, a student who graduated from Aurora Central High School in Colorado, which offers a similar remediation program.

"A lot of us can't really afford to pay those costs in college, so the fact that they were taken care of in high school helped a lot," said Macias, who is attending community college this fall and hopes for a career as a history teacher.

"We won't have to take remedial classes again," said her classmate Brian Torales, who plans to become a police officer. "At this point, I'm ready to go in without paying the extra money I would have had to pay in college."

Dante Bills, their advisor, said, "Up front the students kind of are, for lack of a better word, clueless about the benefits of the remediation. But once they get to college they realize how far ahead they are."

The partnership in Tennessee between high school teachers and the community college faculty who represented higher education started slightly awkwardly over boxed lunches and pasta salad in an executive conference room called the River Room at Chattanooga State Community College, say several who were there. But over 10 meetings and four months of planning, longstanding barriers began to come down.

Angry and embarrassed by the fact that so many high school students aren't prepared for college, "A lot of people want to assign blame, that this is the fault of K-12. And K-12 says, 'Well, higher ed isn't sending us the teachers we need to teach the content," said Victoria Harpool, assistant executive director for academic affairs for the Tennessee Higher Education Commission and coordinator of the SAILS program. "We don't care whose fault it is. The reality is that it's happening and we've got to figure out a way to address it."

Elsewhere, there remains resistance from both sides. When CUNY tried to help New York City's high schools better prepare their students for college, Logue recalled, they were stymied by the sheer number of schools and by university faculty who prefer to set their own standards for the students they accept into their courses.

There have been other efforts to address the college-readiness problem in high schools.

The State University of New York System, which spends $70 million a year on remedial education, is experimenting with a test of college readiness for 10th and 11th graders, hoping to catch those not on track for college.

"I absolutely think everyone should be doing this," said Casey Sacks, project manager at the Colorado Community College System. "We know it's making a difference."

The includes Lewis' student at South Pittsburg who choked up when he graduated in the spring.

Without the extra help, said Lewis, "he would have struggled, and the buy-in wouldn't have been there."

But with the prospect that he'd be among the students actually ready to start college, she said, he would stay in her classroom working even after class was over.

"He was just determined that he was going to get this done."