There are millions of kids in America who the USDA considers "food insecure" -- they live in households without regular access to nutritious food. For them, school feeding programs are essential.

On this episode of Educate, we visit Shaw, Mississippi, a town of about 1,800 people, located in Bolivar County, where one-third of the population is considered food insecure.

"We don't even have a grocery store," said Betty Newson, a Shaw resident. "You have to make sure you buy enough food to last you for a while before you go back again."

Newson lives with her daughter and her grandson, Condarius, who goes to an after-school program called Delta Hands for Hope, where he gets homework help and a free meal. In the summertime, places like Delta Hands for Hope may be one of the only places kids in Shaw get a balanced meal during the day. 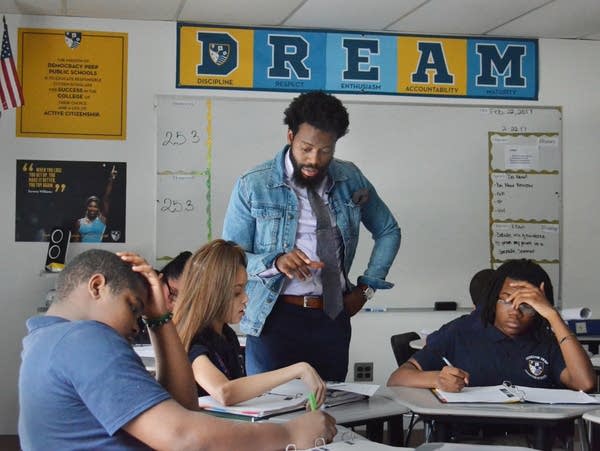 Food insecurity is one of many problems affecting kids and their education in rural America. As jobs and people continue to move to more urban areas, another big issue is finding and keeping good teachers.

This APM Reports documentary tells two separate but connected stories about teachers that American schools desperately need but can't hold on to: black men and those willing to work in rural areas. There are surprising similarities in why schools struggle to attract and keep these teachers that are particularly relevant now when the divides between urban and rural — and white and black — are getting so much attention. Sign up to Educate to listen to our documentary when it comes out Aug. 28

After-school programs like this are facing the possibility of big cuts in the federal budget proposed by the Trump administration back in March. Trump's budget director, Mick Mulvaney, defended the move in a news conference:

But it turns out that there is evidence that interventions like Delta Hands for Hope help kids do better in school. Studies in California and Texas found that students in federally funded after-school programs attended school more and had a better chance of moving on to the next grade. Student test scores improved slightly, too.

Subscribe to Educate to learn more about what's at stake when children don't have regular access to nutritious meals. It's not just physical health; mental health can be at risk, too.