At a public charter school in Boston, students spend years preparing to go to college. But paying for it is another story.

"A lot of colleges ... give lip service to this idea that they want more low-income minority students," said Liz Willen, editor-in-chief at the Hechinger Report. "They're trying their best to have a more diverse class and they're recruiting these students from all over the country but when it comes down to it, the full rides really only go to a handful."

Willen spent the year following the senior class at Match High School, a charter school in Boston. It's a place where students are groomed for college from day one. But when they get to the end of senior year and they're making their final choices about where to go to college, many of them realize that it's going to be really hard to afford. 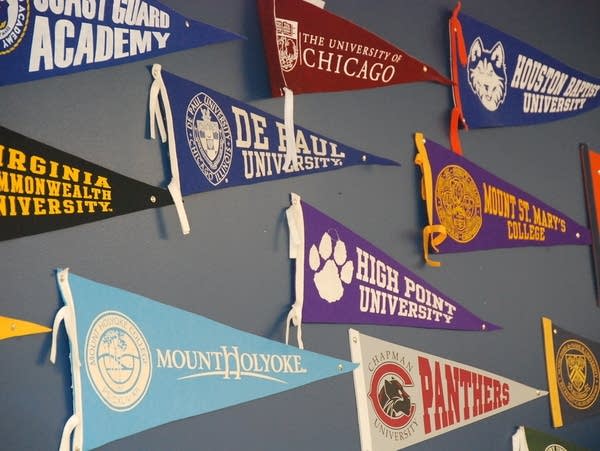 Many low-income students go on to college but don't finish. Money can be part of the problem, but often there's more going on. Our correspondent Emily Hanford introduces us to teachers and researchers who are investigating the nature of college persistence. Listen to our documentary. Also: People who are successful in school and in life have more than just grit on their side. Read Emily Hanford's reflections on the grit research in this op-ed.

"So a lot of times these decisions actually come down to how much more money, how many loans will I have to take out, what is it a reasonable amount of debt to go into, and what is the real cost of a college education," Willen said. "And every single one of these kids and families, even those who have hugely generous scholarships, are frightened."

They're afraid of going into debt - any debt - because they're not sure, frankly, if the whole college thing will really pay off. College is expensive - costs have risen more than 60 percent since 2006. Every student and family has to ask themselves how much debt they're willing to take on. But low-income students are asked to pay much more. A report by the Education Trust shows that, after taking financial aid into account, low-income students must pay, on average, more than three-quarters of their annual family income to attend a four-year school. That's nearly five times the proportion wealthier families pay.

Willen profiled several students at Match who were grappling with tough decisions.

"At one point I was like, 'Do I really want to go to college?'" said Aneudy Polanco, a student at Match.

When WIllen met Polanco at the beginning of the year, he was juggling a lot of different things - baseball practice, a job at TJ Maxx, living with a single mom and younger siblings, including a baby sister. Willen could see that Polanco was tired.

"When I saw him a couple of times during the beginning of the year, it was touch and go," Willen said. "He was falling asleep in classes. He was late on his essays. He was struggling to keep up with all of the deadlines."

To find out what Aneudy Polanco chose, listen to the episode - subscribe to the Educate podcast: Apple Podcasts | RadioPublic

A special thanks to WGBH reporter Kirk Carapezza, for sharing some of his audio of Match students for this episode. Here's the story he produced about Match's senior signing day.