Gov. Andrew Cuomo recently signed a bill that will make all public colleges free for New York residents. Other states and cities have free college programs, but Cuomo's "Excelsior Scholarship" is the first to cover tuition at four-year colleges in addition to two-year schools. When he signed the bill last week, he said this was a long time coming.

"Today my friends, college is what high school was 70 years ago," Cuomo said at the bill-signing ceremony. "It is not a luxury. It is a necessity."

According to the Georgetown Center on Education and the Workforce, college is indeed a necessity for most Americans. Two-thirds of jobs in the United States will soon require at least some college. And right now, tuition at a four-year public university in New York is about $6,500 a year. Cuomo's program will cover that for families making up to $100,000, with the cap rising to $125,000 in a couple of years.

But critics argue that the Excelsior Scholarship falls short of helping more people get to and graduate from college.

On this week's podcast, we talk to Sarah Garland, executive editor of The Hechinger Report. She recently wrote a story about the Excelsior Scholarship and learned a lot about what it doesn't cover. For one, it doesn't pay for the cost of room and board. And in New York, room and board can cost twice as much as tuition. It also won't be available to students who go to school part time, which could make a lot of low-income students ineligible, because to cover living expenses, many of them have to work. In fact, Garland says the Excelsior Scholarship is not really designed to help low-income students at all. 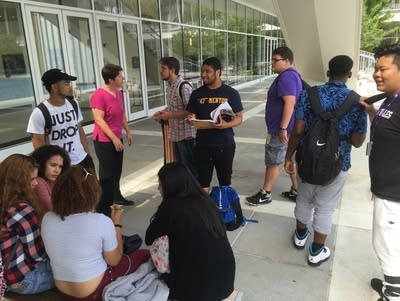 A mother and son go from homeless to college. Read more.

Students from the lowest-income families are much less likely than middle-class families to complete a bachelor's degree by the age of 24. What's more, to send a student to college, the lowest-income families have to spend 84 percent of their annual income. Advocates say it's these students who should be the priority when designing new public programs to help cover the costs of college.

Garland profiled a family that doesn't qualify for the Excelsior Scholarship — a mother and son who are both trying to get their degrees, but under very different circumstances.